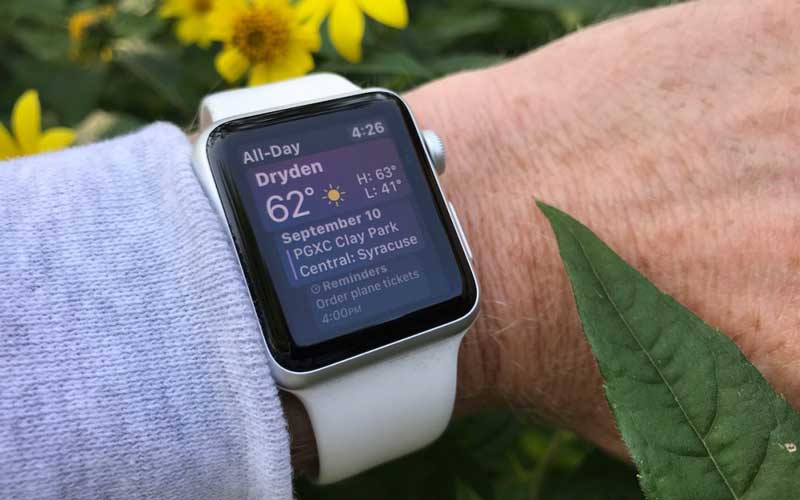 With watchOS 4 now arriving on Apple Watch users’ wrists, it’s time to make sure you aren’t missing out on any of the important and fun features the new watchOS has. watchOS 4 works on all Apple Watch models, even the original Apple Watch. It does require iOS 11, so if you’ve been waiting to upgrade the iOS on your iPhone, you’ll need to update it first.

#1: View Apple Watch apps in List View
This is my favorite feature. While selecting an app on the Apple Watch looks impressive, it can be challenging to locate and tap a specific app. What icon do I press? Now you can show all the Apps in a List view, accessed by force-pressing the App screen. No more selecting the wrong icon when trying to open an app.

#2: Dock Scrolls Vertically instead of Horizontally
This is a close second on favorite new features! The dock now scrolls vertically instead of horizontally. It seems much more natural. Just press the side button to see the Dock, and you’ll notice that it now scrolls vertically—this makes sense since one of the ways to scroll it is by turning the digital crown. You can also now arrange Dock items based on either your favorites or which Dock items were used most recently. You set this via the watch app on the iPhone.

#3: Siri Watch Face
The new Siri watch face doesn’t add new speech capabilities, but it does show timely information, pulling in personal details and suggestions from apps such as Calendar, Reminders, and News. It also shows Now Playing controls when you’re playing audio on your iPhone, along with Apple News headlines and stock tickers. You can customize what data is shown in the Watch app on your iPhone. I really like this new watch face.

There is also a new Toy Story face and a Kaleidoscope face that changes slowly as time goes by—you can speed it up by turning the digital crown.

#4: Flashlight on Your Wrist
You can now use your Apple Watch as a flashlight. Just swipe up to find and tap the new Flashlight button in Control Center. When you select this, your Apple Watch turns the screen bright white. Out walking or running at night? Swipe left to access a flashing option. Press the side button or digital crown to turn the flashlight off. You can also swipe left again to turn the display to red.

#5: More Fitness Encouragement and Options
Need a little encouragement for the day? Or to close your rings in the evening? The Activity app is now more chatty and will make suggestions in the morning to inspire you. It will also remind you at night if you are close to closing a ring.

Apple gave the Workout app some nice attention, too. Starting a workout is easier than before: it now requires only one tap, Do Not Disturb turns on automatically, and your default playlist can even start playing. With the workout underway, you can now switch easily to a different workout type (swipe right and tap the + button), and see a multi-workout analysis at the end of the entire session.

Swimmers using an Apple Watch Series 2 or 3 can now track sets and rests, pace for each set, and distance for each stroke type. Apple also has added a High Intensity Interval Training workout type.

Finally, your Apple Watch can connect with some gym equipment, like ellipticals and indoor bikes, allowing it and the machine to share data. Look for an NFC label on your machine, and tap it with your watch.

#6: Multiple Playlists On the Go
Do you have AirPods and listen to music from your Apple Watch? With watchOS 4, you can sync multiple playlists and albums via the Music settings in the iOS Watch app. In previous versions of watchOS, you could only sync one playlist. Plus, for Apple Music subscribers, your automatically generated favorites mixes can sync automatically.

#7: More App Enhancements: Phone, Timer, and Camera
This is not necessarily a single features, but Apple also made improvements in other apps in watchOS 4. I use the Timer quite a bit and now the Timer now has a Repeat button, so you can repeat a timer with a single tap. I find myself using this more often than I thought. You can dial phone numbers manually with a new keypad in the Phone app. And the Camera app offers some new remote options, including support for starting and stopping videos.

All-in-all, watchOS 4 is a solid upgrade, and the changes will make your Apple Watch both more useful and easier to use. Look for an all new tutorial soon on watchOS 4 showing these new features and more!

New Tutorial: What’s New in iOS 11 on the iPhone